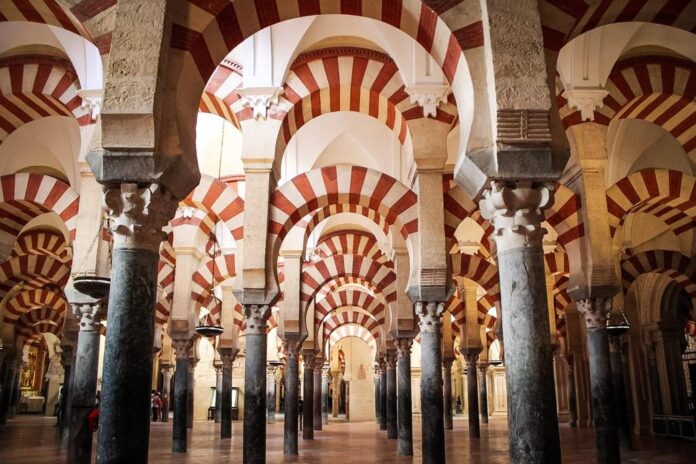 “Córdoba. You have to go to Córdoba”, said a collegue who lived in Spain for some years. “Ok, maybe…” was the answer she got. She couldn’t get any other answer as Córdoba was a city we knew nothing about and almost hadn’t heard about. A quick internet-search confirmed what she said; we had to go there! Certainly the city looked beautiful. It had an interesting history and one building alone made us convinced. We had to see the amazing Mezquita of Córdoba!

The city started as a Roman settlement in the 3rd century BC. After the Romans followed the Christians, then the Muslim rulers conquered it before the Christians took it back again. At one point it was the biggest city in western Europe. Cordoba was famed as the”city of the three cultures” with Muslims, Jews and Christians living peacefully in coexistence. Today Córdoba is a modern city with lots to see. It’s home to several pieces of Moorish architecture, Roman ruins, beautiful patios, narrow lanes in the medieval part of the city. In addition, the modern part north of the historic centre has a more local vibe.

Mezquita of Cordoba – a stunning masterpiece

The Mezquita is worth the trip to Córdoba alone. Certainly, it is one of the most stunning buildings we ever visited. Therefore it should be on every travelers bucket list. No pictures can justify the experience of being there.

The Mezquita, or Mezquita-Catedral de Córdoba (Mosque-Cathederal of Córdoba) is one of the worlds greatest works of Islamic architecture. It is belived that it started with a Christian church on the site. After the Islamic conquest it was shared by Muslims and Christians. Emir Abd al-Rahman purchased the Christian half of the church in 784. He demolished it to give space to the grand mosque on the same ground.

The building was converted to a Roman Catholich church in 1236, when Córdoba was returned to Chrisitian rule. Afterwards, the building was undergoing several changes to the existing structure. The biggest change being the construction of a Renaissance cathederal nave in the middle of the structure.

Walking around inside the building will show you why it’s called the Mezquita-Catedral. In some parts you walk under islamic arches and collums. In other parts you pass small chapels or enter the magnificent central cathederal nave in the middle.

It can be very crowded to visit the Mezquita as it is the main sight in Córdoba. Therefore, we recommend to go early (before all daytrippers arrive) or in late afternoon. Then you will have a better chance to avoid a long line, and the biggest crowds inside.

It is possible to visit the bell tower, the former minaret of the mosque. Only a limited number of visitors are allowd every hour. Because of this we recommend to buy your ticket early in the day as it can get sold out.

Castle of the Kings – Royal history in Córdoba

Near the Mezquita is the Alcázar de los Reyes Crisitianos (Castle of the Chrisitian Monarchs). This fort-palace built under Castilian rule in the 13th and 14th centuries, served as one of the residences of Isabella I of Castille and Ferdinand II of Aragon. Furthermore, this also happens to be the place, where the monarchs first met with Christopher Columbus as he prepared for his voyages.

Cordóba’s Alcazar can’t be compared with the grandness and beauty of the Alcázar in Seville. Still, it is a beautiful construction that should not be missed if you are in the city. First of all there are some beautiful mosaics inside, and the towers at the walls offers great views. For us the most impressive part was the garden. It is beautiful with all its fountains, fish ponds, flowers and orange trees.

The bridge from the Romans

Crossing the Guadalquivir River in the historic centre, is the Roman bridge of Cordóba. Built in the 1st century BC and reconstructed several times since. It is believed that Via Augusta, connecting Rome with Cádiz, passed over the bridge. Most of the stucture seen today dates from the 8th century after a Moorish reconstruction. Also, when evening falls, the bridge will be charmingly illuminated. Featured in some scenes in “Game of Thrones”, the bridge has become more famous in recent years.

Avoid the crowded, touristy, partly uncharming, sometimes unfriendly streets closest to the Mezquita and the Alcázar. Instead, head some few streets away. Then you will find it. The real charm of Cordóba. In the narrow lanes, filled with flowers pots, beautiful doors and balconies, orange trees and nice squares.

Spain once had one of the largest Jewish communities in Europe. The Judería is the old Jewish quarter in Cordóba. In contrast to the modern centre more north in the city, with taller and more grand buildings, the streets in Judería has lower buildings, most of them whitewashed. It reminds a bit of walking a labyrinth. Probably, you might end up getting lost, but enjoy it if so happends, because in these narrow lanes there is so much to see. Behind beautiful gates are hidden patios, tile works and handicraft shops. Also, here you also can visit the Sinagoga (the synagoge). It’s a small and not very impressive Synagoge, and not in use for prayers anymore. Still, it’s worth the visit as it has an important historical role in the history of the Jewish precense in Andalucia.

While walking around the city you will probably also pass some churches. We recommend not only to pass them, but also to enter some of them, for the reason that Spanish churches are often richly decorated. Furthermore, mostly they are free to enter, but donations are welcome.

Above all, Spain is food! Hence the limited time in Cordóba, we focused on the historic centre, even we also visited the modern part. Imagine Iberico ham for breakfast, tapas for lunch, and oxtail stew for dinner. Surely we had the best time!

In the historic centre in can be challenging to find a restaurant not only for tourists. The more away from the main sight you get, the better it gets. We found excellent places to eat. We also visited a local food hall focusing on different street food. For lunch the last day we did not have a sit-down lunch. This because we wanted to save both time and to hold back a bit on the money (Spain is not so cheap anymore). This we didn’t regret at all. Previously, we had seen this place selling the most delicious baguettes with the oh so tasty Iberico ham. They taste amazing and they doesn’t cost a lot. Win-win we call that.

Cordoba is full of beautiful backyards, the so-called patios. Filled with flowers, often Geraniums, and other flowers and plants, some of them are definately worth a visit. Some are for free, like Asociación de Amigos de los Patios Cordobeses. It’s run by an assosiation of “friends of the patios in Cordóba”. Even this patio is nice, our favourite was at Palacio de Viana. One more beautiful then another, this former aristocratic palace has no less than 12 patios.

Getting there and around in Córdoba

We arrived Cordóba via train from Sevilla and left via bus to Granada. The train and bus station are located just oposite each other. It is possible to walk the 1,2 kilometres to the centre. Another option is to take bus 3 from the street between the two stations. Also, a taxi is of course possible.

Córdoba is well connected. Several buses and trains connects with other parts of Spain.

The centre of Cordóba is small and compact. Even some few parts of the city are a bit hilly, walking is possible to all sights and places of interest.

Interested in reading more about Andalucia? We have been to beautiful Sevilla, we have explored Granada, and we’ve visited the coastal town of Malaga. Read about the relaxed Huelva province to go off the beaten track in Andalucia, or to follow in the footsteps of Christopher Columbus.

Huelva province – off the beaten track in Andalucia

Egypt – a great mix of beach holiday and history

8 of the best things to do in Weimar

A mini guide to Jaisalmer – best places to see