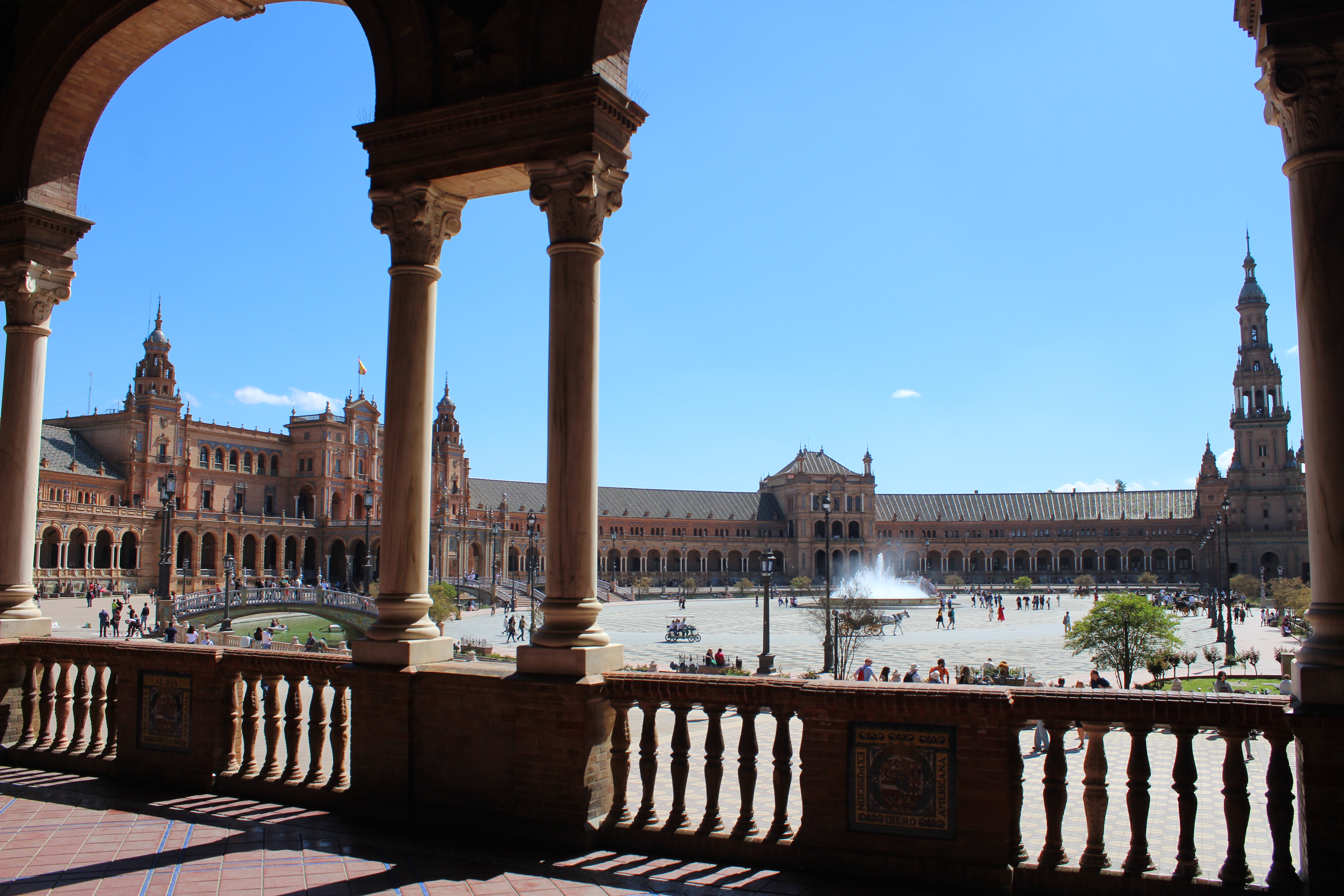 A legend has is that Hercules himself founded Sevilla. The city is old. Very old. Ruled by the Romans, by the Moors and by the Castilian kings over centuries. It’s been one of the richest and largest cities in the world thanks to Spain’s Golden Age, and it’s important role following Cristopher Columbus expedition to the new world. Today Sevilla is a modern city with world-class sights, beauty around every corner and a thriving restaurant scene. It’s Spain’s fourth-largest city – and we fell totally in love with it.

As part of a journey in Andalucia, Sevilla is an obvious stop en route. Sevilla is home to some great world-class sights not to be missed. Even so, for us the best sights in Sevilla is the city itself. To see it’s beautiful streets, local life and of course to enjoy the food.

The cathederal in the heart of the city

Sevilla is home to the worlds largest gothic catherderal, and the third largest church building in the world. The cathederal, officially know as Catedral de Santa Maria de la Sede (Catherderal of Saint Mary of the Sea), can’t be described with one word only, but if we should try the word would be huge, enormous, magnificent or masterpiece. It was built between 1434 and 1517 over the remains of what had been the main mosque in the city.

Other highlighs include magnificent interiors. The main altar, paintings by several artists, including Goya and, the tomb of Christopher Columbus himself. Walking around inside the cathederal really make one feel small. Everything is so grand – so huge, and so pretty!

A visit to the cathedreal can be a test of your patience. The line to get in is long, and waiting in that line just takes too much time. That’s why we recommend to purchase your ticket online. Then you will enter through another entrance, and you will avoid the huge masses lining up for what seems like forever.

A palace for the royals – our favorite in Sevilla

The Real Alcázar of Sevilla. A magnificent Unesco-listed royal palace. Built in a mix of Christian and Mudéjar architecture styles makes this palace a breathtaking masterpiece. The site has over 11 centuries served as a fort for the Cordoban governors, a palace for the Muslim rulers and later as a royal palace for the Christian kings of Spain. More recently the Real Alcázar also was a filming location for the Game of Thrones TV series.

A visit to the palace is a must-do while in Seville. The different rooms and halls are so richly and detailed decorated. Parts of the palace are still in use as the official residence in Sevilla for the Spanish royal family. Not only is the palace beautiful, but also the gardens are amazing. While we were there wandering the gardens – we couldn’t remember seeing any gardens like this before.

We purchased out tickets online and could skip the longest line when entering the palace. We visited in the late afternoon, as a try to avoid the biggest hords of people. As closing time arrived we had to leave the grounds, but we could easily have spent more time there than the 2,5-3h we did.

The history of the New World

Next to the cathederal, at Plaza del Triunfo, in an old merchants consulate, you will find the Archivo General de Indias (General Archive of the Indies). This is the home of the extremely valuable archival documents telling the history of the Spanish Empire. The collection is vast; the archives has over nine kilometers of shelves! 43.000 documents and over 80 million pages from 1492 until the end of the empire in the 19th century.

Situated in Parque de Maria Luisa, built in 1928 for the Ibero-American Exposition of 1929, you’ll find another landmark in Sevilla, the Plaza de Espana. It’s a huge half-circle of buildings running around a vast square with numerous bridges, mini-canals and fountains. The grand building itself is a mix of architecture styles such as Renaissance Revival, Moorish Revival, Art Deco and Spanish architecture. Around the square you can also see tile pictures showing historical scenes from each Spanish region. Even it doesn’t have the history of other sights in Sevilla, this is a must-see. It’s so impressive with its size, arches, collums and towers.

This is a very popular place to visit. We visited mid-day. Of what we have seen, it is even more beautiful in the evening when the buildings are illuminated. You can reach Plaza de Espana easily by foot as it is located close to the city centre. We also recommend a walk in Parque de Maria Luise. It’s a beautiful oasis in the city – perfect to escape the noise and the sun.

Another landmark in Sevilla is the Torre del Oro (Tower of Gold). This 13-century watchtower was the last great building made by the Muslims in the city. The tower has an interesting history. It had a military function in defending the city, and it also served as a prison in the Middle Ages. What we liked the most was the great view we got from the top of the tower. If you visit on a Monday the entrance is for free.

A gigantic mushroom in the city

Not everything in Sevilla is old and full of history. The city also has some new and modern architecture. One of the newest landmarks in Sevilla is the Metropol Parasol. This wooden structure opened in 2011. It is located at La Encarnación Square. Locally this construction is known as las setas – the mushroom. The design is by the German architect Jürgen Mayer-Hermann and, it is said to be the largest wooden structure in the world. Via a lift you can get to the top for amazing views of the city, and the entrance is only €3.

The biggest attraction for us

Even Sevilla is full of historical world-class buildings and monumental architecture, the biggest attraction for us was the city itself. Everywhere you go – around every corner it is beautiful. The streets are full of life with shops, cafes, restaurants and bars. Don’t spend all your time doing sightseeing. We spent most of our time just wandering around in the streets.

When visiting a city like Sevilla we love to walk around without a plan. We always enjoy getting lost and see where we end up in the end. The city is full of small and bigger churches, and some of them are worth to visit. A small and relatively anonymous church buildings can be so richly decorated once inside.

A city for food lovers

The streets around the bigger attractions is of course more busy (touristy), prices are often higher and, of experience we know that the quality in such places varies. It is always better to get a bit away from the most busy areas, to the smaller narrow streets where you find more locals in the restaurants and bars.

If you are a shopoholic Sevilla is also a good place for you. There are several shopping areas with something for everyone. For those who want to burn off some extra bucks there is a huge selection to choose from.

Sevilla has an international airport only 10 kilometres east of the city, serving several cities in Europe. Buses and taxis serves Sevilla airport, making the journey to the city convinient.

You can also arrive with bus or train. Trains in Spain can be expensive, so we recommend to book online, or to purchase your train ticket a few day in advance at the train station.

Most parts of Sevilla is walkable, and its mostly a beautiful walk. If you prefer public transport to get around there are buses, one metro line and one tram line.

Maybe you visit Sevilla as part of a longer journey in Andalucia? We have been to some other great cirties as well. Read about Cordoba, Malaga and Granada to see what you can do there. Should you want to visit a lesser known part in the west of Andalucia you can read about the Huelva province here.

Wroclaw – best things to do on a weekend

Weekend trip from Berlin – 5 great things to do in...