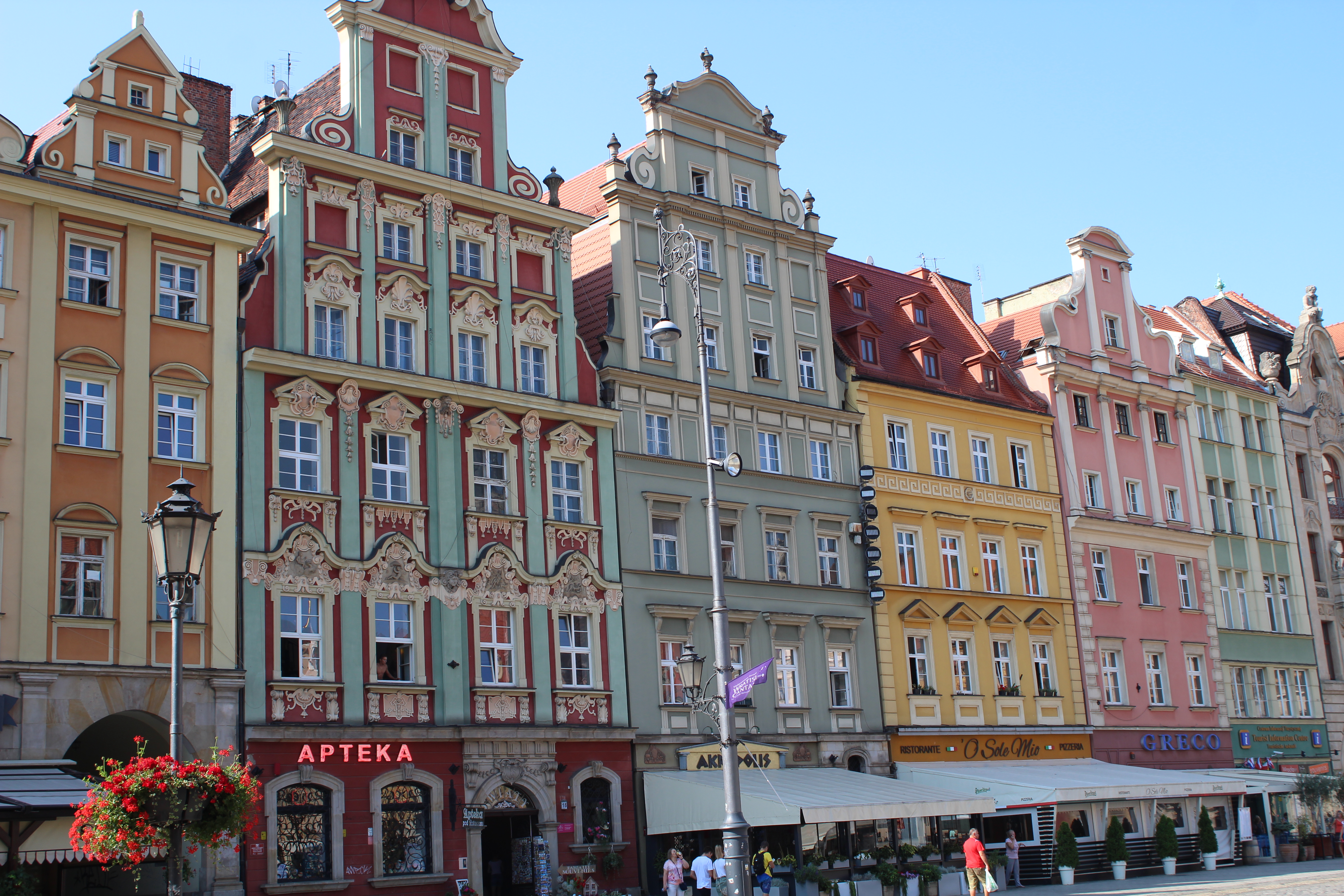 Most people have heard of the bigger Polish cities such as Warsaw and Krakow. What we have learned, is that Poland has much more to offer. From smaller historic cities, to mountains, deep forests and long beaches. Poland has it all. This time it is a historical city. Join us as we explore Polands fourth-largest city Wroclaw.

Living in Berlin has many perks. One of them being the proximity and easy connections to several interesting places in Poland. After settling down in Berlin, this is our third visit to our neighbour. Previous we have been a weekend in Poznan and a day trip to Szczecin. Looking for a weekend filled with culture, history, food and city life, Wroclaw was a natural destination.

Wroclaw is located on both sides of the Odra River. Above all, because of its 12 islands and 130 bridges, the city is very idyllic, with many green spaces spread all over.

On a short weekend from Friday evening to Sunday afternoon, one can’t see it all. Sacrifices must be made. One have to choose carefully what to see. Rather than stressing around, trying to see it all, it’s better to choose some few places and to see them better. Read on to see how we spent our weekend in Wroclaw.

Wroclaw’s city centre is small and compact. Likewise is the Old Town. Most noteworthy is the Market Square, or Rynek. Surrounded by beautiful and colorful buildings, it is one of the largest market squares in Europe. Rynek was heavily damaged during World War II, but almost all of the square’s builings were intact, and got carefully restored in the years after.

First of all, do visit the Old Town Hall. The facade of this masterpiece is a mix of Early Gothic and Renaissance styles. Topped with a 66m high tower it’s an impressive sight. You can visit inside for a small fee. There are some exhibitions the Gothic rooms and halls.

In the northwest corner of the square you’ll find two cute, small houses named Jas i Małgosia – Hansel and Gretel. In the backyard, next to the church there is a nice, although crowded bar.

Above all, for us the best with Rynek was just walking around looking up at all the beautiful houses in different styles. Certainly, in the evenings and night time the square gets quite lively as there are loads of restaurants and bars here. We found most of them to be a bit too touristy for our taste. Have a look look in the side streets just off the square. For sure, here you will find much nicer and quieter places. Also, the prices are lower the more away from the square you get. We found a very nice Jewish restaurant, next to the White Stork Synagogue.

Furthermore, there are some nice churches worth visiting as well. Church of St. Elizabeth is next to Hansel & Gretel. Also, the Church of St. Mary Magdalene is just one block east of the square.

The many dwarfs in Wroclaw

To commemorate the Orange Alternative (an anti-communist movement) a monument of a dwarf were placed on a street in 2001. The Mayor of Wroclaw wanted to continue this new tradidion. Therefore, in 2005 the first dwarfs appeared in the streets of Wroclaw. For the reason of that, nowadays, over 300 dwarfs can be found all over the city. Hence its popularity, today they are considered a tourist attraction. It’s possible to buy a dwarf-map. With this you can go dwarf-hopping around the city.

Another highlight in Wroclaw is the University Quarter. The magificent baroque main building of the university is not to be missed. Built between 1728 and 1742 this is a grand building located at the banks of the Oder River. The main buliding is a museum displaying historical objects from the university.

Once you entered through its impressive blue and gold Rococco gate, you can purchase your ticket. Of the historical halls, the Aula Leopoldinum is the masterpiece. This grand baroque ceremonial hall is a sight for the eyes. Due to restauration it was closed during our visit. For that reason you can see the hall only from a gallery above the hall at the moment (autumn 2019). But still. What we could see was very impressive.

A pleasant surprise on our visit was a small classic orchestra doing their rehearsals for an upcoming event. Visitors in the building could sit down to listen and enjoy while the rehearsals went on.

Walk up all the stairs. They will lead you to the Mathematical Tower. A viewing terrace at 42 metres will give you stunning views over the grounds and the city in all directions.

Similarly, the adjacent university church, the Church of the Holy Name of Jesus is a must-see. It’s one of the architectural masterpieces in the region. The spectacular interior in this Baroque-Rococco church is nothing but stunning. Look up to see all the frescos in the vaults.

After a visit in the university and the church, there are a couple of restaurants on the square in front, offering refreshments and also food, whilst you still can enjoy the views to these grand buildings.

Hence the name, it’s not really an island anymore. In the 19th century the island was connected to the mainland. This is the oldest part of Wroclaw. The western parts of Ostrów Tumski was the first to be inhabited. Wroclaw’s first church were built here.

The main sight is the Cathederal of St. John the Baptist., a Gothic basilica built between 1244 and 1590. Furthermore, the Church of Our Lady and the Church of St. Giles is also places of interest. Also, there is a museum, and the Cathederal Island is home to the Botanical Gardens as well.

Probably, the best view of the Cathederal Island you will get from the opposite side of River Oder. From here the views are spectacular. Similarly, if you enter via the Piasek Island, you will get great views from here as well.

Another place to visit, not on the Catheredal Island, but en route, is Hala Targowa. This lively market hall sells local food, flowers, good coffee and much more. Just outside you can have a refreshing craft beer at Torgowa Craft Beer and Food.

In contrast to the central parts of Wroclaw, the Nadordze neighborhood is like another world. Across the Oder River you will find a mix of grand architecture, crumbling buildings, modern constructions and a more alternative lifestyle. We saw very few tourists here.

The vibe is urban and creative, with small workshops and nice cafes. Besides that there is the street art. We have read about several great murals, and set out to find them. As there is no proper map where to go, it can be a bit walking to find them, as the murals are spread over the area.

You will find some few in the near of Café Rozrusznik, which by the way is worth a stop for a great coffee. Furthermore, head to the street Ul. Roosevelta (Franklina Delano Roosevelta). Here, in the backyards next to a school you will find several great murals. Ask some locals if you can’t find it.

After walking pretty long, looking for the street art we needed a break and some food. By coinsidence we passed a very local place, the Bar Pierożek. Here we got really delicious Pierogis (Polish dumplings). For two times 250gr Pierogis and two soft drinks we payed only zł 34, around 7-8 Euro. On the way back to the city we can also recommend a stop at Bema Café for another great coffee if you haven’t had enough.

Wroclaw airport, 13km west of the city is not the biggest airport. Still, it has some direct connection to European cities. Served by some of the bigger airlines, with connections via Warsaw, Paris, Amsterdam or Frankfurt it should be possible to reach Wroclaw via air from most parts of Europe.

Arriving Wroclaw with train is very convenient. From most bigger places in Poland it is possible to reach Wroclaw. There are several daily connections with Warsaw and Krakow. There is also a connection to Berlin, taking approximately four hours. On weekends the fares are normally very good.

It is possible to travel by bus as well, although train is often more convenient. There are buses to many places in Poland, and from Berlin Flixbus operates the route. If traveling on a budget this might be the better option.

Wroclaw is very walkable. Due to the compact city centre most sights are within some few minutes walking. A good network of trams and buses serves the city if you need to travel a bit out of the centre.

Looking for other cities to visit in Poland? Here you can read about Poznan, Poland’s fifth-largest city. Furthermore, from this part of Poland it is only a short distance to the German state of Saxony. Here we take you to a fairytale castle, historic towns, natural wonders and the beautiful city of Dresden.

Interested in more about Eastern Europe? Read about our journey in Russia. We visited Moscow, Saint Petersburg and parts of Russia’s Golden Ring.

If you rather would like to go more south, we suggests that you read our post from the Balkans, where we visited three countries in one journey.

Best things to do in Udaipur – Rajasthan’s white city

Egypt – a great mix of beach holiday and history